This site has limited support for your browser. We recommend switching to Edge, Chrome, Safari, or Firefox.

We knew we could create a better no-pull harness, building to a higher tolerance with the best materials available. Designed to be lightweight, quick-drying, and ultra-adjustable with a simple magnetic buckle that's easy to put on, that's extra secure. Every detail has been considered, from using Gore® Tenara thread for longevity to outward-facing seams for comfort. Combined with chest, back, and belly adjustments, you're able to create the perfect fit to prevent chafing and slippage other harnesses are known for.

GUARANTEED FOR LIFE, EVEN IF YOUR PUP DESTROYS IT®

Video: Fitting the Lifetime Harness® on your pup
Atlas is a 75lb Labrador and wears a Medium.

To build the best no-pull harness that's easy to put on and comfortable for your pup.

even if your pup destroys it.

For context, my dog can pull EXTREMELY hard. I don’t even trust other reviewers who say no-pull harnesses work for their dog, because no dogs pull-level can compare to Tuna’s. He is a beast.

I’ve tried at least 5 different no-pull harnesses before this one and none of them worked, so naturally I was a little skeptical of this one. It took me a while to get the fit right, but I was shocked to find that it actually did lessen Tuna’s ability to pull. It’s not perfect - there is still some pulling - but the difference between this and the martingale collar I was using is pretty huge! Huge enough that it’s saving me from pulling my back out (repeatedly).

My dog pulls consistently on leash, but the worst is when he lunges towards a dog, squirrel, bird etc. (that’s when the real damage to my back happens) so I was super happy that this helped with that! He can’t use his momentum like he could before because the faster he tries to lunge the more effective the harness is in turning him around. It seems like he’s figuring that out and avoiding lunging now. Which is great!

I think the reason this front clip harness works so much better than the others I’ve tried (I’ve tried 3 different, but similar designs) is the multiple adjustment points. The other harnesses would inevitably slide around in a way that allowed him to leverage the leash against his neck/shoulder and pull just as hard as before. This one seems to be better at staying in place. It’s a simple design but it works really well, and I was shocked by how strong the clasp is! I really didn’t think it would hold up but it’s stayed very secure, and I love how easy it is to put on and take off.

1. Like I said, it isn’t 100% effective at getting rid of the pulling (at least for my dog) but it’s definitely better than anything else I’ve tried! It’ll be my primary harness (at least for on-leash activities) and I’m ordering another for my second dog (who is picking up on the pulling habit).

2. You have to fit it tight for it to work properly, which is to be expected, but it does rub a little under the arm pits. Not as bad as some others I’ve tried, but I noticed a little rawness after several walks in a row.

3. Lastly (and this is almost definitely MY fault), the color isn’t what I expected. I ordered ruby thinking it would be a soft red color but it’s definitely more pink than red. I’d describe it as a dark salmon. So people will probably think my dog is a girl, but oh well lol. It’s not necessarily a con, but I wanted to mention it in case anyone is debating which color to buy.

Overall, I really like the harness and can’t wait to get a 2nd one so I can (somewhat) comfortably walk my two big dogs by myself :) Finally a harness I DON’T regret buying! 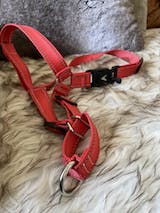 I have a 90 pound insanely active Siberian Husky who is 8 years old. He's a puller alright! I've tried everything! I came across the Lifetime harness and I loved the quality, material, style, and simplicity! But, my dog STILL PULLS! D-Ring on the front OR back? Don't matter he still pulls. Also, the handle on the leash is a little bit rough for my taste...it gave my hand blisters because of the roughness of the leash handle. I would love if APC came up with a No-pull harness design even for the worst, untrained, hyper-active, BIG dog pullers in this world cause that would facilitate everything so much. If the handle can be padded or made our of a soft silicone material that would be a lot better too. Cause trust me, it's exhausting walking my dog!! NOTHING HAS WORKED THUS FAR!!!!

B
Bee B.M. (Boca Raton, US)
Great harness for a strong dog in Florida heat

The Atlas harness is awesome. It is made of a lightweight strong material and is SO SO easy to get on and off. Plus unlike most harnesses, it is lightweight - so my Boxer is not sweating in the Florida humidity due to the harness weight.

D
Doreen Y. (Winter Springs, US)
Quality at its BEST

This gear is perfect for dogs of all sizes. I started out with the harness, leash and poop bag for my bigger dog and quickly realized that I need a set for my wirehair dachshund. You will not be disappointed! 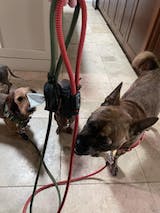 E
Eunice S. (Lakewood, US)
Bought it for all my families dogs

Easy to put on and off with the magnetic clasp. I love this clasp. 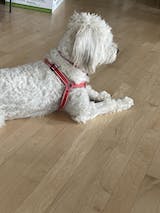 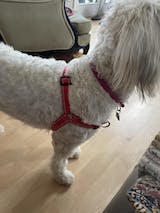 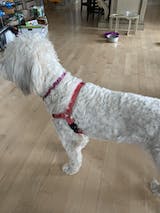